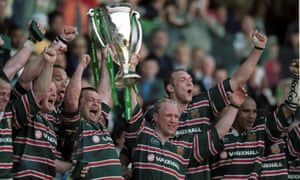 ur story is not an imaginary adventure.” They are the concluding words in a short history of Lourdes Football Club on its website, although the rugby miracle that took place in the small town that nestles in the foothills of the Pyrenees between 1948 and 1968 seems all but forgotten.

Lourdes won the Top 14 title eight times in that period and were instrumental in the rise of France as an international force, culminating in the 1968 grand slam, the year the club last won the title. They now languish in the fourth tier of the French system, bottom of Federale 2 without a victory this season.

“Rugby has lost the conviviality that made it strong,” runs the website review. “Not only because of the evolution of the rules that have enslaved the game and that it no longer involves 15 players but 23 but because television and sponsors dictate the conventions so only big budgets in big cities have a chance of success. FC Lourdais marked an era with an incomparable style of play that left its mark on the world of rugby and many regret [its loss] today. Its players were masters of the offensive game.”

The post-war rise of Lourdes after the war was prompted by social aid handed out by the club’s president, Antoine Béguère, a construction magnate who supplied players with jobs and fringe benefit, although the most celebrated player, Jean Prat, a wing forward who won 51 caps and dropped five goals for Les Bleus, was local.

The decline of Lourdes started long before professionalism. There was only one title after the death of Béguère, who had a heart attack while watching a game in 1960 in the stadium his money had funded. Only four clubs have won the French title more than Lourdes, a number that includes Stade Français, who are currently bottom of the Top 14 and eight points from safety after two victories in their opening 10 matches.

Eighteen years ago, Stade Français lost to Leicester at Parc des Princes in one of the most watchable Heineken Cup finals. The Tigers would be bottom of the Premiership but for Saracens breaching the salary cap regulations: England’s best supported club started to drift five seasons ago, first failing to get to Twickenham for the final, then missing out on the top four before missing out on the Champions Cup.

Failure to arrest drifting leads to sinking, as Arsenal’s experience in the second half of this decade shows, a virtual parallel with Leicester. The Tigers welcome Exeter to Welford Road on Saturday, but will the home supporters be as completely devoid of hope as those who turned up to the Emirates Stadium last Sunday for the match against Manchester City were?

It never threatened to be a contest and was duly one-sided. Watching the Arsenal players offered a lesson in demarcation: the three sections of the team, attack, midfield and defence, did their jobs and no more, often stopping tracking back as an opponent dribbled when they reached the outer edge of their boundary.

They would be able to go into the post-match match review and say they had done what they had been told, but no more. As the former South Africa outside-half Morne Steyn said this season after his final appearance for Stade Français, and not long before the head coach, Heyneke Meyer, left the club: “Not everyone is on the same page and that is the main reason for where we are. You could see with South Africa in the World Cup that everyone was playing for each other but not here at Stade Français.”

Are they at Leicester, a club that supplied six of England’s World Cup squad? There were many times last season when the answer appeared to be no, not least the surrender at Bristol. The different directions those two clubs are moving in showed last season when the hooker Harry Thacker turned from a Tiger into a Bear, moving from the past into the future.

Successful clubs need to reinvent themselves, as Leicester used to do. Saracens have this decade, but their progress, in the league at least, has been halted by the deduction of 35 points, perhaps not enough to see them finish bottom this season: the clubs immediately above them, Leicester, Wasps and Bath, big names who have all won the European Cup, have reasons to be fearful. Relegation may not hold the same threat in England as in France – remember Biarritz? – but no one can trade on reputation.

Leagues started in England in 1987. Five of the clubs in the top flight then were Orrell, Moseley, Nottingham, Waterloo and Coventry while Liverpool St Helen’s and Rosslyn Park were promoted after the first season. London Irish, Northampton and Saracens started in the second tier, Exeter were in the third and Worcester were on the margins.

Northampton, Exeter, Worcester, Sale (who were relegated in 1988 after losing all their matches) and Irish currently make up the top half of the table along with Bristol while the bottom five (and relegated Newcastle) have won 29 out of the 32 league titles between them. The salary cap is levelling out the league with every club now having the means to spend up to it.

Resources are no longer enough. “Lourdes represents the best in French club rugby,” wrote Alex Potter and Georges Duthen in their 1961 book on the game in France. “It is a shining example of social aid well used.” Time moves on, and no rugby pilgrims go there now to watch a club locked in time. No one is too big to fail.

‘Talent only gets you so far’: Ashleigh Barty’s success down to her character, says coach 2 min read

‘Talent only gets you so far’: Ashleigh Barty’s success down to her character, says coach

You may have missed