Ashleigh Barty’s coach has paid a touching tribute to the world No 1, declaring the all-conquering Australian is “a much better person than she is a tennis player”. As Barty savours title glory at the elite season-ending championships in China, Craig Tyzzer has hailed the special qualities that have taken his charge to the summit of the most global of all individual sports.

Tyzzer has been with Barty every step of the way since the she decided three and a half years ago to return to tennis following a stint playing professional cricket with Brisbane Heat. 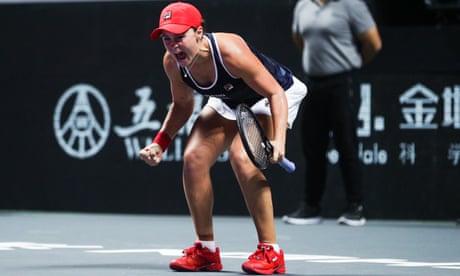 “A lot of people talk about her talent and her tennis but talent only gets you so far and it’s really her character that has taken her to where she is right now,” Tyzzer told AAP in Shenzhen. “I’m lucky enough on a daily basis to see what sort of person she is and she’s a much better person than she is a tennis player. So, for me, that’s been the key.”

The first Australian to win the WTA Finals since her idol Evonne Goolagong Cawley in 1976, Barty is equally proud to be respected as one of the tour’s most popular players.

“That stems from my mum and dad, without a doubt,” Barty said before flying to Perth for Australia’s Fed Cup final against France this weekend. “Mum and dad have taught me everything that I’ve learnt in life. They taught me the values to live by. I feel like I have very strong values because of them. I’m so lucky to have such a supportive network from my family: my mum and dad, my sisters.

“Then professionally, it’s ‘Tyz’, my manager Niki, all of my team; Ben Crowe, everybody behind me. They’re not just supporting me through my career, but also they’re very close friends and will be forever.”

From a shy, home-sick teenager who walked away from the game, the French Open champion has also made a conscious effort to grow off the court. “That’s the beauty of life, the beauty of the journey that we’re on – every day you can try and improve yourself,” Barty said. “That’s probably, tennis aside, the biggest part of my development over the last two or three years. I feel like I’ve become a better person. 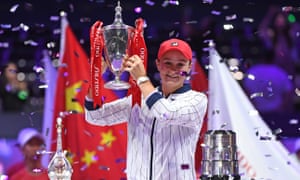 “I feel like I’m learning every single day, I’m learning from every experience. That has nothing to do with tennis, or with tennis matches, tennis experiences or anything like that. That’s purely from a personal point of view. It’s been a massive development for me. It’s come from the people that are around me, the people that surround me, that drive, encourage me every single day to try to be the best version of myself that I can.”

You may have missed